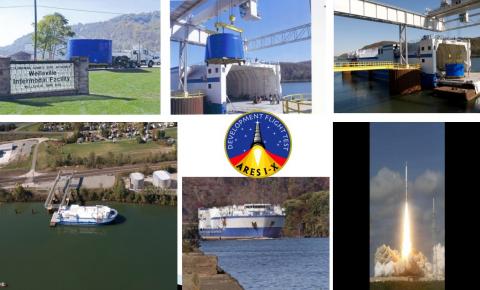 In October 2008, twelve tractor-trailer rigs arrived at NASA Glenn in Cleveland to load eleven steel cylinders (each being 18’ wide and just under 10’ tall, and each weighing between 24,000 and 60,000 lbs.). The parts were trucked over the road by heavy lift trucks 120 miles from Cleveland to Wellsville. In Wellsville, the massive Virginia crane carefully unloaded the segments onto the 82’ wide and 50’ tall Delta Mariner, a ship the length of a football field designed to navigate both river and ocean routes. The rocket parts were components used to build the Ares I-X space vehicle to be the next generation of lift-off vehicles to carry successors of the space shuttle. Bound for NASA’s Kennedy Space Center, the parts took a 12-day journey down the Ohio and Mississippi Rivers into the Gulf of Mexico, arriving at Port Canaveral in Florida where they were assembled and sent on a test launch in 2009.